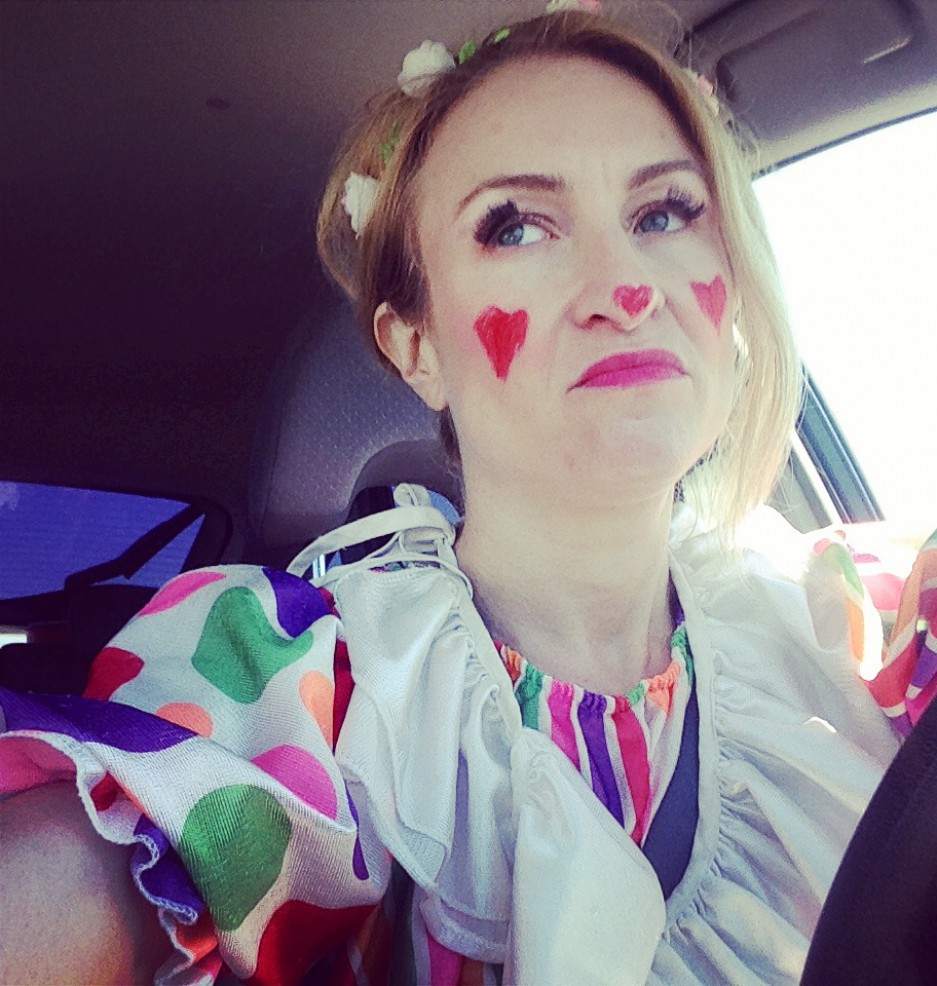 This one was a doozie. Pick up your beers, kiddos!

I looked at my pathetic bank account 7 minutes before I took this gig. $18. You can do very little for $18, short of buying the biggest Ralph’s brand vodka they carry and crying on a toilet while you dream of a better tomorrow.

I got the call about a clown party for a 3 year old 7 mins after I saw the amount. I said yes. I wanted to buy better vodka. Setting a goal and achieving it is part of adulthood.

I drive to the party singing along with Iggy Azlea’s Pu$$y. I felt pretty good about the day. What could possibly go wrong.

I have to change in my car before the gig because I had to be somewhere right before. I have places to be people! I pull down the street from the party. I feel rushed so I just pull the clown pants on over my jeans. I dont think anyone will see them, those gd clownpants are friggin’ huge. I draw on a heart nose, and stare at the awful hat I was given to wear to this party. It’s flaccid like a whales fin after it gets taken out of captivity. I suddenly realize that whale are my spirit animal

I pull in front of the house. Two stories. Small, black fence, music pouring out from the backyard, kids running, adults running, cats running. A strong scent of pot smoke drifts by as I take the dirty box out of the trunk. As I walk towards the party the scent gets stronger. For some reason that line from a Snoop Dogg album comes to mind, “Well, if it’s gonna be this kind party I’m about to stick my dick in the mash potatoes.”.

I walk to the back. There’s a trailer next to a garage. There’s a huge cement circle where there are tables and a DJ playing the loudest music I’d ever heard. The word “fuck” is in every song. There was even a Taylor Swift song that he somehow mixed into another song that I think was called “Fuck” because that’s the only word it said. I mentioned this is a 3 year olds birthday, right? Good.

I ask for the mom. I get pointed in her direction by a girl who had a tattoo of a rose and gun on her tit and eyeliner that wrapped around her head.

She leads me to the boy. A cherub with a suit on. He’s adorable.

“Where are you doing your show?” She yells over the music

Again with the show? What is this asshole who books this telling people?

“Where do you want me to go with them?”

“There,” She points to a dirt patch by the trailer.

“It’s really, really loud. Can I go somewhere quieter so the kids can hear me?”

She leaves. Gets a beer. Starts dancing to my new favorite song, “Fuck”.

I gather the kids. They are angels, truly. Sweet and helpful. We paint faces, play games. They are lovely and don’t seem bothered by the music or the chaotic amount of adults with tear drop tats or weed smell. Then…

“Hey! We want to see you do the show. You need to come out in the middle.”

She’s walked away. I follow and see the entire adult party is sitting in their chairs facing the center, where I was set up to do the “show”. The fucking show. Fuck. “Fuck”, my new fave song was now an anthem for my life.

The music was so loud. I approach the DJ.

“Hello, how are you today?”

He doesn’t look up or answer.

“Great. So they want me to do the show in the middle, so can you turn down the music? I can’t hear the kids and they can’t hear me.”

He changes the song. And turns it up. I listen for a second and I’m pretty sure it’s said:

“Pop, pop, pop in your neighborhood, this white clown motherfucker up to no good, gonna blast until this mother fucker cold dead, gon pop,pop,pop upside this bitches head”

I may be projecting. But isn’t that catchy?!?!

I walk back to the center. I hear:

I feel and realize my pants had fallen and my jeaned ass was exposed. My face got hot. Everyone at the party was looking. The eyeliner started to crinkle with laughter. Perfect.

I sit, I do the balloons and the magic. The kids loved it. They were angels. I finish. Then I hear:

“White ass clown, do a balloon for me.”

It’s the…Grandmother? I don’t know. Her tit tattoo was more faded than the others and her eyeliner creased into her face a bit more.

“Ok, I only have a few left, but what would you like?”

“Can you make a heart with an arrow through it?”

Then she pulls down the other side of her shirt to expose the other tit.

I do the balloon for her. She smiles. The kids are running around, dancing to a song I think was called “I Killed This White Clown And Got Away With It”.

I power walk to my car. I throw the dirty box in there so hard I break the mirror of the face painting thing.

I pull away quickly and start to hum “Fuck” softly to the tune of Happy Birthday.

I have another party tomorrow. 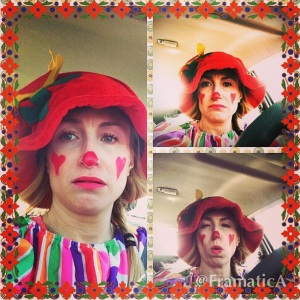 Another Day in Clown Town.

Another day, another soul crushing experience that  I am happy to share with all of you now.